He was remembered as hard working, loyal, impeccably honest and ethical, and frugal. 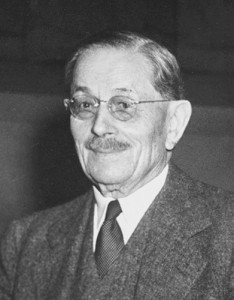 Frank X. Pfaffinger was a Bavarian immigrant who worked for the Los Angeles Times from 1887 until his death in 1940, a total of 53 years. As the longtime business manager of The Times, he also served as the treasurer of its parent concern, The Times Mirror Company, for 22 years. Mr. Pfaffinger (pronounced FAF-in-jer) became the close friend and confidant of Harry Chandler, the legendary publisher of The Times, and they participated together in many business investments.

Living in the Midwest, Mr. Pfaffinger secured a job offer from The Times and took the train to Los Angeles. He arrived one morning at 3 am, and was at his job at The Times by 6 am the same day. He was remembered as hard working, loyal, impeccably honest and ethical, and frugal.

Mr. Pfaffinger played a role in the growth of Los Angeles by investing exclusively in Southern California business and residential development, particularly in the greater downtown area. During these years, Mr. Pfaffinger secretly began providing his co-workers with financial assistance when they faced difficult or unforeseen circumstances. This aspect of his philanthropy was little known during his lifetime.

In 1936 Mr. Pfaffinger contributed the bulk of his estate to establish the Pfaffinger Foundation. He requested that, to the extent necessary, its resources be directed to assist needy employees and former employees of Times Mirror.

He was remembered as hard working, loyal, impeccably honest and ethical, and frugal.